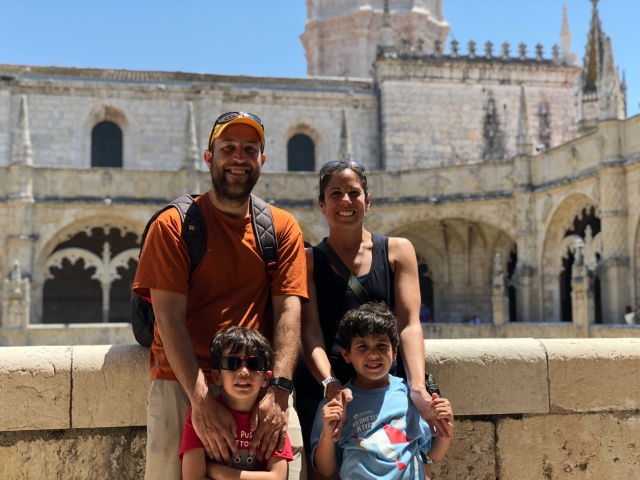 I have said to many people that our sabbatical this summer is a lot like camp to me*. We are here for exactly 8 weeks, split up into roughly two 4-week chunks, and my emotions over that time have without question tracked my memories of summers growing up. That is to say, I start out feeling like I have a ton of time to do the things I want to do, then I look up and it’s almost over, then I start labeling everything as “The Last Time I’m Going To…” with every activity.

*Of course I have said that – I equate almost everything to camp. Stop rolling your eyes at me.

As I am writing this, it is our penultimate night in Lisbon. Tomorrow, for the sake of the analogy I am making, is the last day of Camp Lisbon. Maybe we should have a friendship circle? Maybe I should have the guy who owns the diner down the street sign my pillowcase? I definitely plan to eat up all the sweets we have left in our cabin AirBNB.

Hilary and I managed to find a babysitting service through our food tour guide (Celia Pedrosa of Culinary Backstreets, who has become a part of the family since we’ve been here. I cannot recommend her enough if you are coming this way.), so we were able to get out for a glorious, much-needed night to ourselves last night, and we spent a lot of it discussing our feelings on our time here.

First things first, we absolutely love Lisbon. We were here for three days back in 2015, and we fell in love with it then, but that was such a short period of time, and it was just the two of us, that I wasn’t sure it would hold up to our romantic viewpoint upon closer inspection.

I am happy to say (and wistful to ponder) it not only lived up to our recollection, but in many ways surpassed it. This is a charming, fascinating place. There are elements that remind me of many other cities (San Francisco and Jerusalem, for example), but it is completely singular at the same time.

There are so many distinct neighborhoods, each with their own vibe. We rarely felt a need to go out and “do” much of anything – simply walking around and taking in the buildings, the street art (and graffiti), and the people was enough to feel like it was a day well spent.

Lisbon is a city of many contradictions – it’s very old school in many ways. There are still lots of decaying, crumbling buildings, representing a city without a lot of wealth or the wherewithal to improve itself. At the same time, it has incredible civic institutions. The aquarium is world class. The science center was probably the kids’ favorite thing we did here. The zoo was wonderful, and that’s not even getting into the wealth of impressive-looking museums we didn’t go to because Hilary doesn’t like walking around staring at art, let alone our children.

There is a refreshing lack of Westernization here, though it is certainly a modern city. By our count, having traversed a pretty good chunk of real estate in our 27 days here, we saw exactly one Starbucks, one Burger King, one Subway, one Pizza Hut, and one McDonalds. Instead of commoditized, mass-produced, market-tested-and-approved chains, each street is full of small vendors, whether they be restaurants, produce shops, or goods.

This is all changing, of course. Like us, more and more people are discovering Lisbon (and Portugal in general) as a destination, and we were as likely to hear people speaking English as Portuguese almost everywhere we went. I understand it though. To walk through the city is to immediately begin plotting how you yourself could refurbish a business or plot of land so you could make a more permanent move here.

We asked each other last night what our lasting memories of Portugal will be as we head to our next destination, and eventually, home.

Hilary went with our trip to Porto for the Festa do Sao João. Hard to argue with that choice. The festival, Porto’s answer to the Festa de Santo Antonio we experienced a couple weeks back, features one of the sillier, stranger, yet incredibly joyful traditions I’ve ever seen, as revelers take to the streets to bop each other on the head with plastic hammers*.

*My parents reminded me this is also a tradition in Israel for Independence Day, which I’ve somehow forgotten. That has to be related in some way, it’s too specific not to be, but I have no idea how. 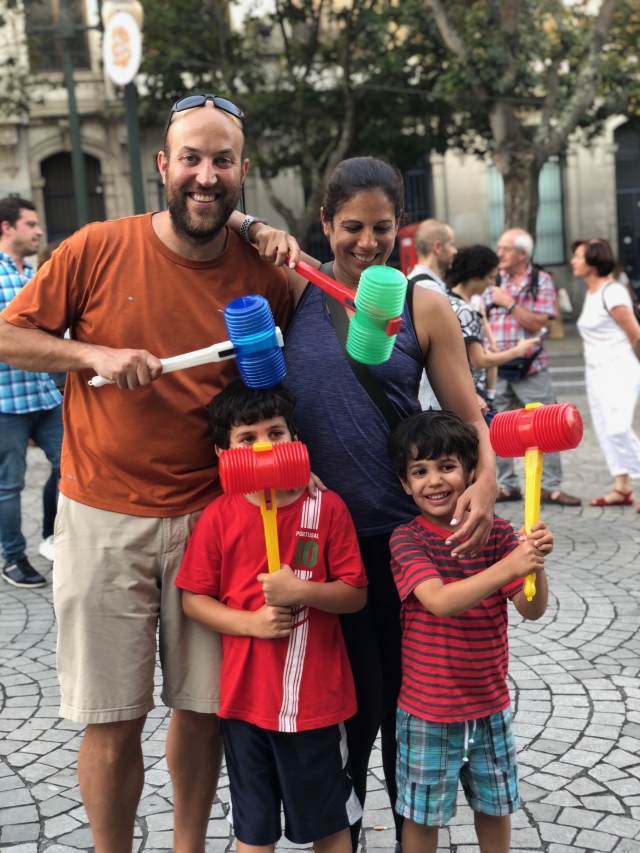 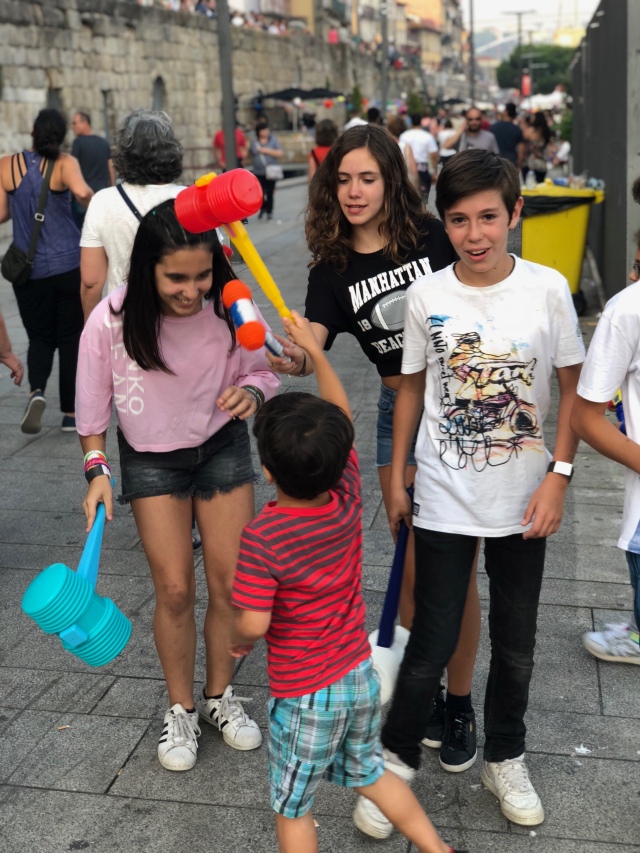 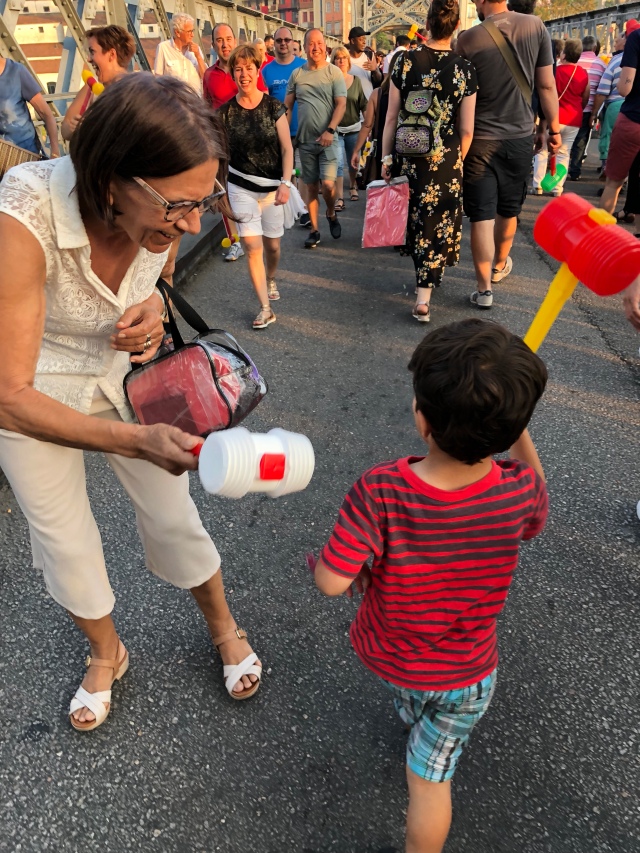 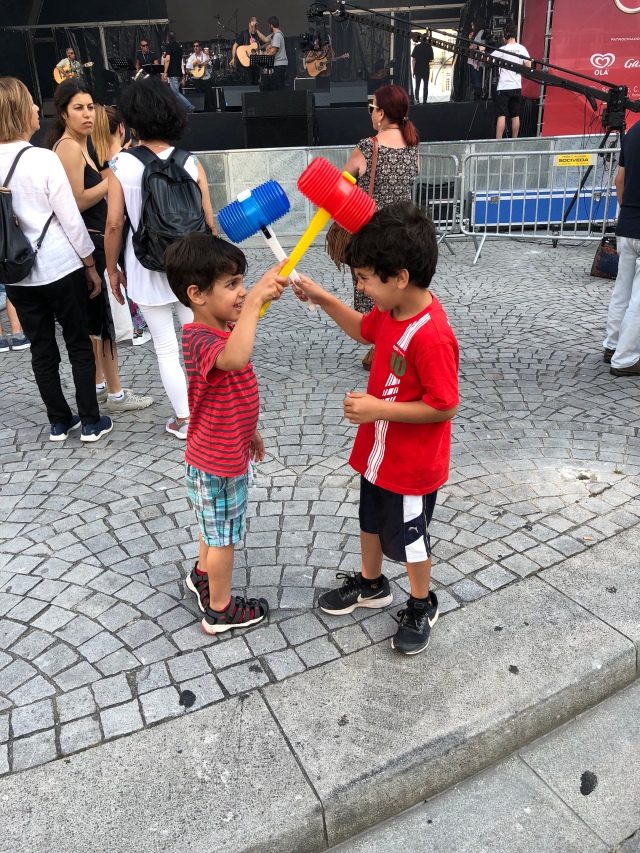 As I am sure you can imagine, spending six hours bopping everyone in sight with a hammer is essentially a utopian experience for six- and four-year olds. If Jamie and Emmett were contestants on the Dating Game, this is what they would propose for their date with the bachelorette. It was so goddamn fun for the kids, and for us (and, I’d venture everyone else) it was a wonderful way to live in the moment and be juvenile and playful.

As for my choice, I went with something very different, albeit for ultimately the same reasons.

In the middle of our time here, we took a day trip to the medieval city of Obidos. It was very cool, but a long day, and by the end of it the boys were extremely tired and cranky. We have definitely learned so far that after a big day of travel or experiences, it’s often wise to slow it down the next day and do something simple like visit a park or garden.

The day after Obidos we decided to walk to Belém, a neighborhood we’ve visited several times, which has a lot of excellent public gardens and parks. On that day, they were watering a lot of the grassy areas with sprinklers, and the boys really, REALLY, wanted to play in them.

Normally, if I’m being honest, in a similar situation at home, I am pretty confident our answer to them would be no. We’d think of the lack of clothes to change into, the fact that they’d likely get the car seats all wet, or any number of other excuses. But here, with our ability to slow things down, it was much easier to say yes, and so our boys spent the better part of an hour running in and around the sprinklers, getting soaking wet in the process and playing like they didn’t have a care in the world, which of course, they don’t, and shouldn’t. 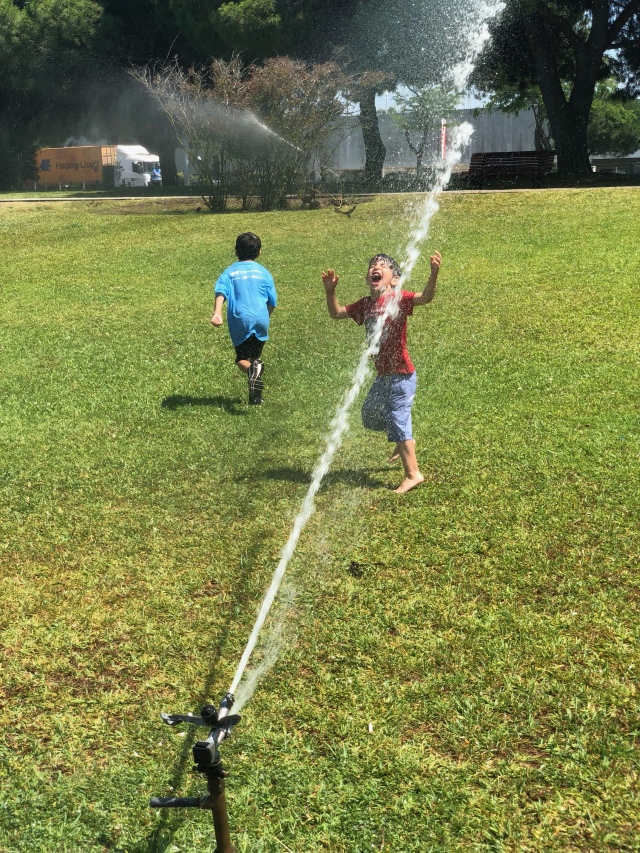 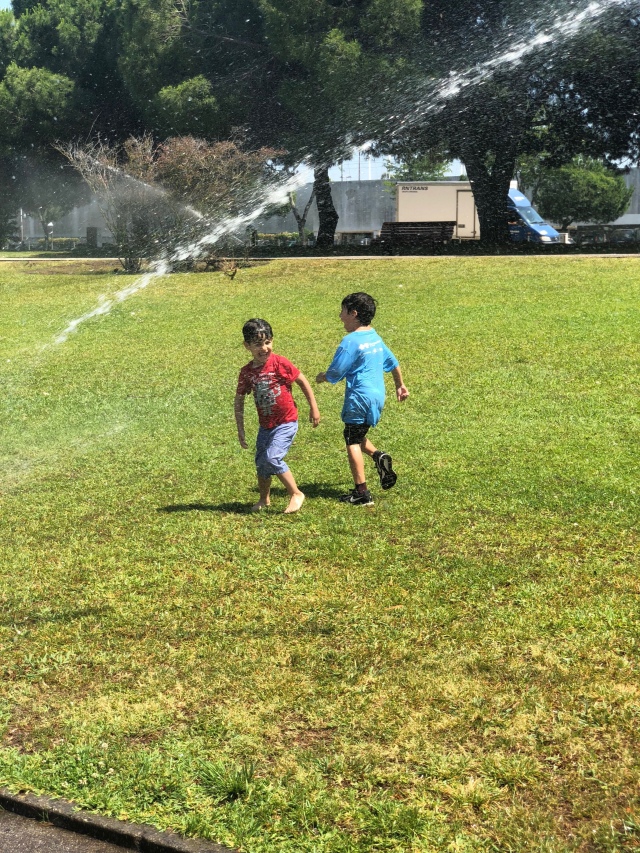 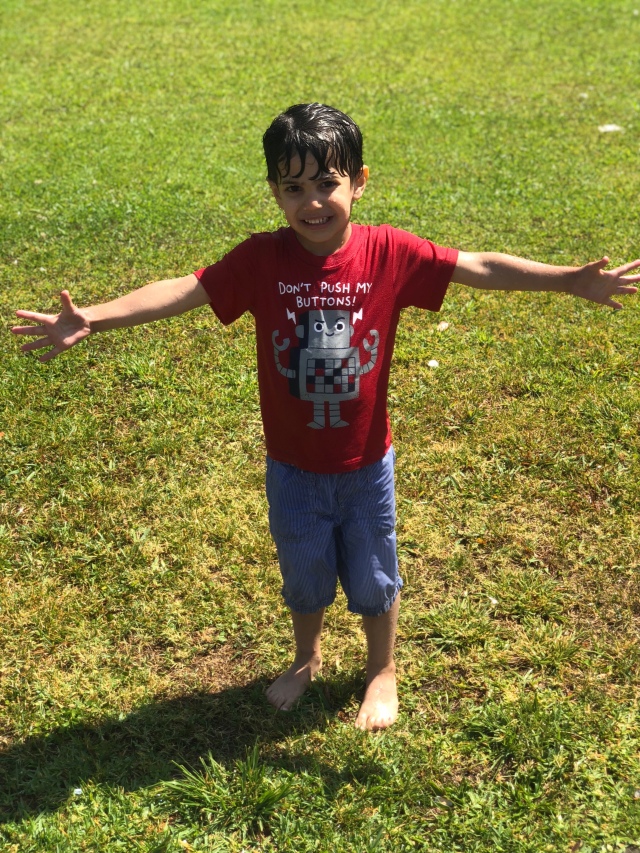 That memory is the one that will stick with me the most as we leave this wonderful place, because it encapsulated exactly what I wanted from this trip for myself and especially for our children: the ability to have timeless fun. If I take away nothing else from my time here, I hope it is to look for more opportunities for that in our normal, hectic lives, because the smiles on their faces was as intoxicating a drug as I can imagine, and I want more.

2 thoughts on “Reflecting On Lisbon”